The Dilemma of Offering Money to Young Vagrants 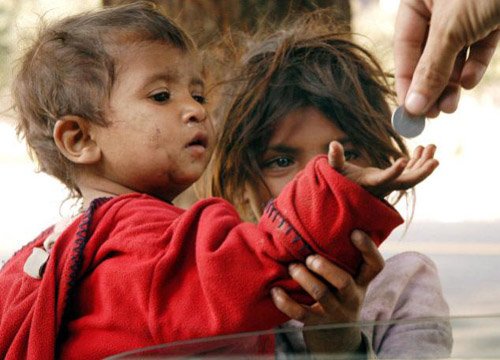 Some people think that offering money to young beggars is completely justified since such acts reflect kindness and humanity. But I think that while most of us paying to these youthful transients think that we are indulging ourselves with great deeds in the expectation of improving our afterlife, we forget to take into consideration the results of our activities in this world. This tells me that as a society we are still in ignorance when it comes to issues like these.

Among all kinds of people who beg on the streets of Pakistan, the ratio of children receiving that money is the highest. Even today, this world has many generous people who believe in the concept of charity and human welfare. However, along with showing their support to purpose-built organizations and NGOs, which are functioning in a way of genuinely helping the needy, many end up giving money to beggars on streets simply out of sympathy. When argued with, these empathetic well-wishers of the society explain their inability to resist the faces of innocent children resulting in them paying a little amount out of their wallets each time. They also reason by expressing that the kids asking on the roads aren’t at fault. They deserve better and by giving a couple of rupees they fairly attempt to diminish their difficulties, at least for the day.

Where in no way am I against the noble cause of charity and promoting thoughtfulness, paying to these road vagrants, particularly the youthful ones, seems absurd to me. People say that these little kids aren’t at fault. True. However, the individuals behind these children are. We are very much aware of the beggars’ mafia in our country that is answerable for these effectively obvious bums at the edge of each street, at the stop of each signal, and outside each restaurant. When we pay these children out of generosity, the benefit is mostly enjoyed by heartless goons who are motivated to expand their mafia even further by carrying out mass kidnappings of little kids. The children working under such mafias are dependent on drugs from an early age and they become dependent on others as a method for living, leaving no room for improvement in the future. Why should we help the poor by promoting begging and not by other impactful ways? Is it because we prefer the ease of paying anyone randomly on the road than going through the exhaustion of a proper process? Are we willing to risk the future of these children, we pretend to care about, for the sake of our timely comfort?

A perfect example of real help in our society is Shehzad Roy, who not only provides free education to children like these but in return pays them for acquiring knowledge. We can proudly mention TCF here as well which has worked for as long as 25 years to make their students are capable enough of securing admissions in colleges like IBA and LUMS. Many similar organizations can be named which are truly working towards the betterment of our country’s youth. My only question now is; Why not make a difference by donating our money to organizations indulged in such extraordinary work instead of indirectly promoting evil in society?